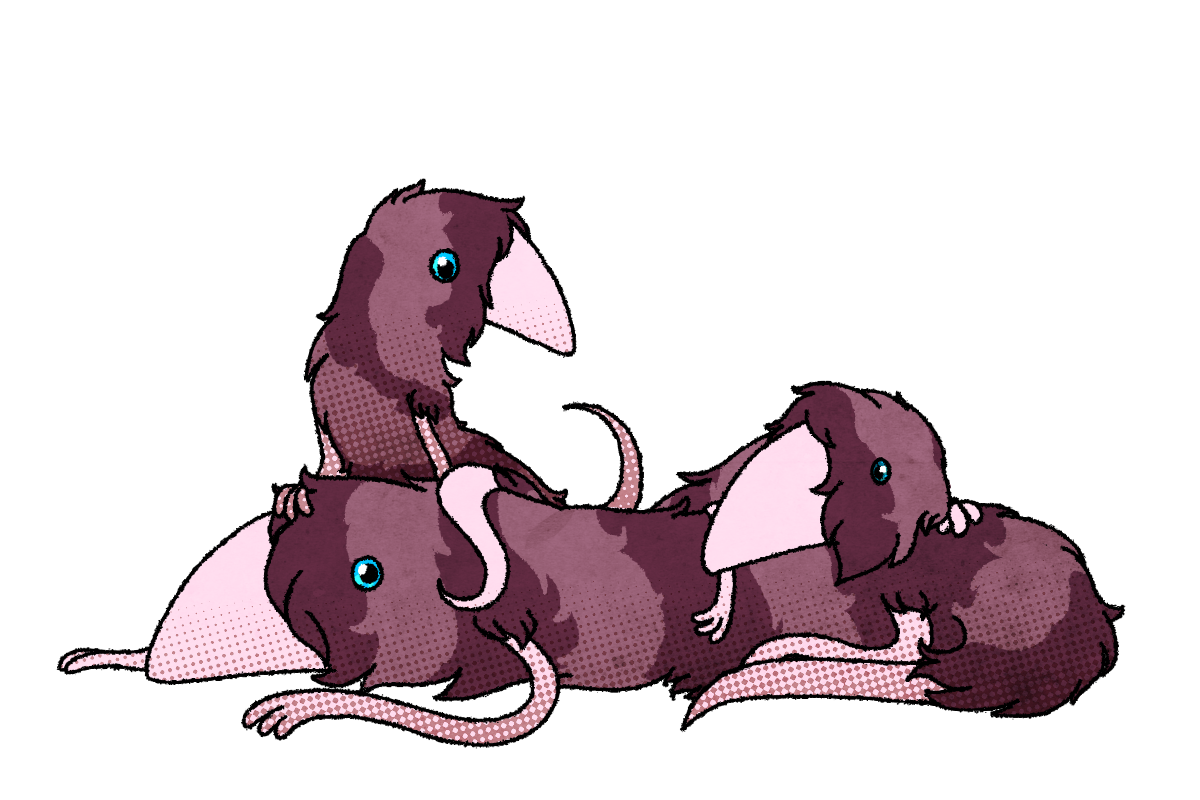 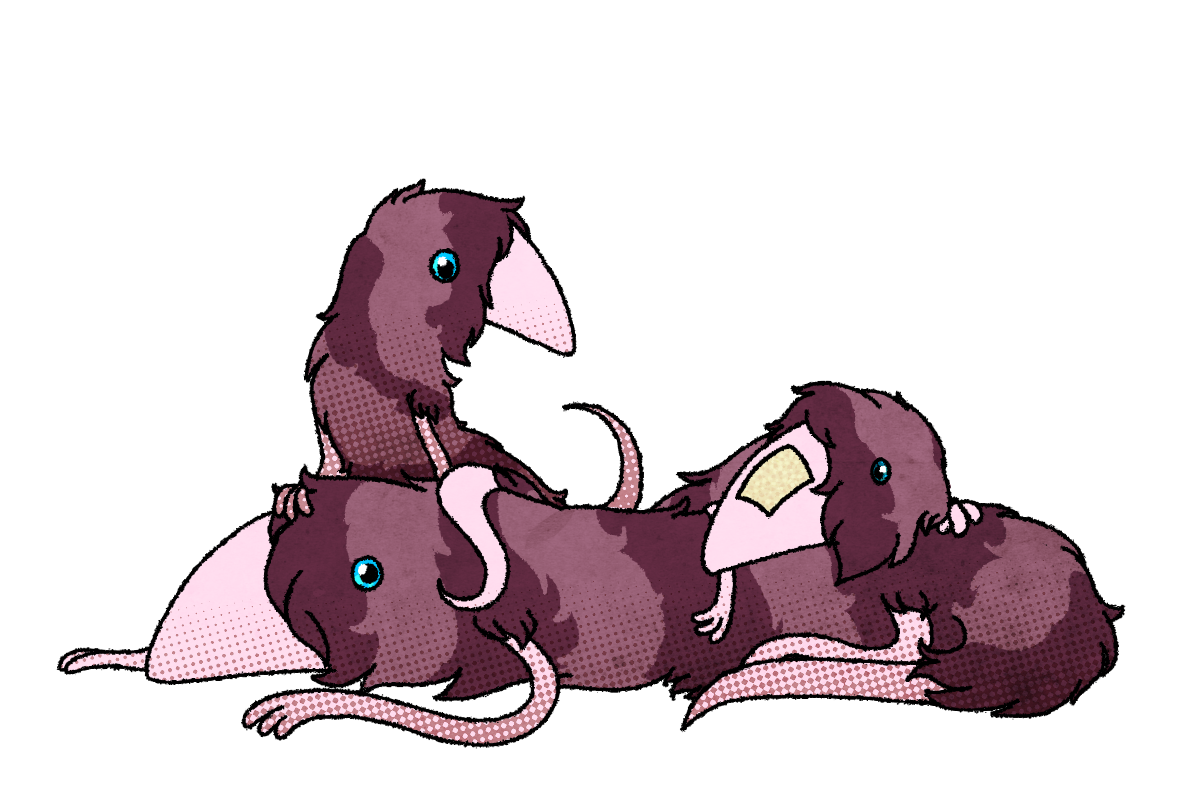 The fibrideri is a very small and light stranger whose body is mostly coated in a fluffy covering of wooly fur (similar to that of angora rabbits, if a bit more coarse). Though this mauve, striped fur covers the majority of the fibrideri's body, its tail, limbs and snout remain uncovered. Difficult to pluck out but only slightly more difficult to cut than the average human hair, swift slices from a knife will typically slide through its fur with only minor, occasional splitting, but sharp enough scissors can cut it.

The fibrideri's exposed skin is soft, warm and pleasant to the touch, capable of a moderate degree of stretching, and its internal contents are light and foam-like, flattening when pressed but returning to its original shape when pressure is released, much like polyurethane memory foam. Due to this, the fibrideri's body deforms when poked or pressed, springing back within a few seconds. Its small, beady blue eyes peer through its fur, and are hard and smooth, like the glass eyes of a stuffed animal.

It communicates through short, high-pitched honks, beeps and squeaks1. No words have been observed.

1. I overheard a lot of their chatter while observing them- they're really vocal. The way they sound reminds me of that video of a porcupine I saw a while back

The fibrideri appears in suburban residential areas. Small towns with quiet neighborhoods and little outdoor activity are likely to attract fibrideri infestations. Though it can generate either inside or outside, it dislikes generating in direct sunlight, and when generating outdoors, it will often appear below trees, underneath awnings, or out in the open on cloudy days. In these places, the fibrideri appears in groups of 7 to 18, as a palm-sized, fur-coated ball. This initial form elongates over the course of roughly 10 minutes before its snout, tail and eyes emerge from the mass, and the fibrideri crawls along its way. Fibrideri that generate outside are slightly more active and vibrant in color than indoor-generating fibrideri.

The fibrideri's disposition is relaxed and inattentive, paying little mind to its surroundings. It crawls along in a low-standing, lizard-like manner, resting on its belly when not in motion. Groups of fibrideri will wander their environment, but will not deliberately disperse, and will not travel out of a 19-foot radius around their point of generation. They do not appear to be prevented from leaving this radius; rather, they simply turn around at the edge of it as though disinterested. A fibrideri displaced from this radius will crawl back towards it once released; their knowledge of this location seems to be inherent, and they will squeeze through any gaps they come across or press themselves against walls when placed in an enclosed space outside of this radius.

Fibrideri that generate outdoors enjoy sunlight, and will regularly lay down and bask if their territory expands into an area that recieves sun. Conversely, they become restless and huddle together in the cold. Rain does not perturb the fibrideri outside of its response to cold, and water slides over its fur without affecting it.

The fibrideri is a highly social strain, and groups will frequently converse and interact with each other, their honking speech rarely ceasing. Fibrideri physically interact by pressing heads together, laying side-by-side, or crawling on top of one another2. Though very social, they do not notice when a member of their group dies or is removed.

2. They just flop on top of each other like toy snakes. It's so cute. Almost nostalgic in a weird way.

The fibrideri is as ambivalent towards sensitives as it is towards the rest of its environment. It pays a sensitive little mind even when they enter its territory (though the group's constant conversation slows somewhat), and is very passive towards handling, allowing a sensitive to pick up and hold it without struggling3. The only time a fibrideri will respond to touch is when it is harmed, at which point it will crawl away, or squirm out of a sensitive's grasp.

The fibrideri is too small, weak and passive to pose any severe physical threat to sensitives, but a typical sensitive's skin is irritated by the fibrideri's fur, causing a mild itching sensation4. The intensity of this feeling is different from individual to individual, and increases gradually over the fibrideri's life. A fibrideri at the end of its lifespan may even cause a rash that persists for a few days. However, this sensation is not directly harmful to a sensitive outside of annoyance and potential skin damage from scratching, and as such, the fibrideri cannot be considered a threat.

3. Picked one up and it just went limp.

4. Aughhhh. I regret holding one of these guys. They give you the worst itch. Like a wool sweater but like twice as bad.

An aging fibrideri's fur begins to turn white at its face, limbs and tail, with a salt-and-pepper pattern spreading through its fur. It basks more often if it is an outdoor fibrideri, and is generally less active and less social regardless of location. It dies silently at the end of its life, its faded fur falling out of its skin and forming a pile around its body. Its skin and foamy innards crumble into powder and are carried away on the wind, while its pile of hair remains for quite some time. Other fibrideri will root about or roll in the leftover pile, seemingly having little regard for its origin.