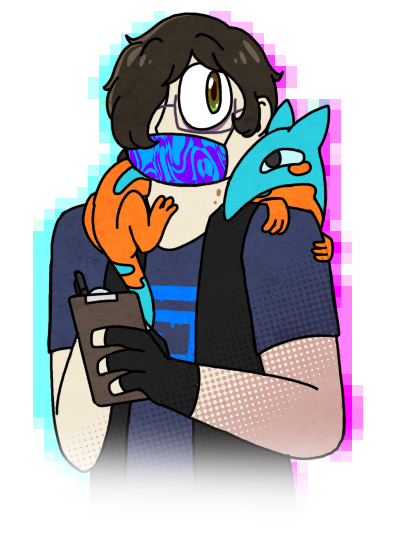 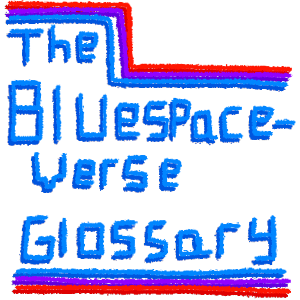 "Hey there! You look like you're either new or confused, hahah. Well, welcome to the information archive for this weird little space we call Bluespaceverse around here.

If you're not from the home universe, fortunately there's a handy information archive there, too. It's right this way. Check there if any of the stuff here confuses you.

Oh, and you can go that way to go back to the index."

"First, we should talk about strangers and sensitives." 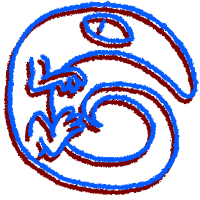 Strangers
"So, strangers work a bit differently in Bluespaceverse than you're probably used to in the home universe.

Let's get the things that are the same on the table first: Strangers inhabit strange space, a sub-dimension that lays right on top of yours. Normally you can't see 'em because this dimension is one that isn't directly connected to the base one. You need to be a sensitive to see into strange space and, thus, see strangers. Also, strangers aren't alive in the traditional sense. They're closer to phenomena than they are animals. They don't directly imitate nature; rather, they imitate human nature and society, so if you see, say, a matadroli, which imitates a cat at a glance...that's imitating the human perception of a cat!

Now for the stuff that's a bit different here. Strangers in Bluespaceverse have what we'll call a thoughtspark. They don't have a typical thoughtform- they're not really conscious with their decision making, yadda-yadda. But the thoughtspark is what you can kind of call a very, very rudimentary thoughtform- the most it can do, though, is give the strangers a touch more of a "personality", and allows certain sensitives (who we'll get to) to establish a connection with them.

(Also, a fun fact: Strangers in Bluespaceverse can move their eye markings! Unless they're damaged or drawn over, at which point they become inert until healed or cleaned off.)" 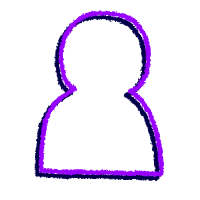 Sensitives
"This bit's more of a footnote than anything else, to get the info about sensitives on the table so we can talk about the unique subtypes in Bluespaceverse. As I'm sure you already know, a sensitive's a person who can see into strange space and, thus, see and interact with strangers. All the special types from the home universe are more-or-less the same here, so if you're not already familiar with them, head to the home universe's archive to learn more."


"Now that that's out of the way, I'll tell you about the unique sensitives here." 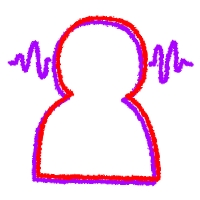 Transmitters
"Transmitters are a sensitive type that can form a connection with a stranger's thoughtspark, allowing a transmission of information from the human thoughtform to the strange thoughtspark. In effect, this allows the sensitive to directly influence- though not quite outright control- the stranger's behavior. Think of it kind of like when you're riding a horse and you pull a little on the reins to tell it to turn. It's not really a direct puppeteering, and more of a (pretty powerful) suggestion.

Since transmitters need to connect to the stranger's wholly alien thoughtspark to be able to do this, it's a pretty difficult task, and not a lot of transmitters even know they're transmitters due to the sheer difficulty of it. Transmitters will often recieve some information back to their thoughtforms, which they percieve as surreal images and words in their mind, difficult to describe in a very dreamlike manner. This often clues more knowledgeable sensitives into the presence of a transmitter- leading to a lot of 'wait, this isn't normal?' moments in sensitive communities.

Transmitters need to be pretty close to strangers in order to keep the connection up. That connection will be lost if they move more than fifteen feet away. They can mantain the connection for a maximum of an hour and a half, and can't reconnect to the same stranger for the next 12 hours." 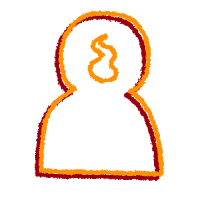 Igniters
"Igniters are a sensitive type that can form a connection with a stranger's thoughtspark, but not in the same way as transmitters. Rather, an igniter forming a connection with a thoughtspark causes it to become temporarily much more complex, comparable to a proper human thoughtform. The behavior and personality of the stranger become a mix of both their own, and that of the igniter who gave them this new thoughtform.

"Ignited" strangers react in a myriad of ways, most often being quite confused and frightened for a short while- it's pretty alarming when you were barely aware of the world before but can suddenly think like a human! Typically an ignited stranger becomes protective of the responsible igniter while the connection is still present, but this isn't always the case, and depending on both the igniter and the stranger, they may grow hostile over time, or become immediately hostile upon ignition.

"Right- now we should talk about some bigger differences between this universe and the home one; namely the reason it's called Bluespaceverse to begin with!" 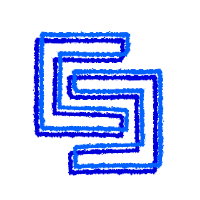 Bluespace
"Bluespace is a subdimension offset from the home dimension, strictly opposite of its neighbor-dimension, redspace. Somewhere in between the home dimension and Blue Hell, it resonates with both, while carrying its own unique properties. Bluespace is associated with order, passage, and quiet. If you were to look into it somehow (such as being a psychic, or using a colorspace headset), you'd see a blue mirror of the real world, frozen in time, with smooth passageways cutting nonsensically through buildings and even trees.

The 'offset' of bluespace is how close it is to the real world. This varies from place to place naturally, but can be artificially changed. The closeness of bluespace to the real world can influence it in many ways. Also, since it resonates with Blue Hell, it can interact in weird ways with strangers that also resonate with it. Bringing the offset down extremely low in a contained area is part of the process for refining psycholy into psycozine.*"
* "Right, psycozine. It's a refined form of psycholy that has way stronger effects on the body than native psycholy. Do not take this stuff like you would psycholy, you will not have a good time. It IS useful, however, for powering colorspace tech, since bluespace is somewhat drawn towards it and it's also highly conductive. Oh, and it glows." 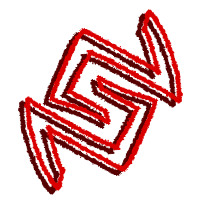 Redspace
"Redspace is a subdimension offset from the home dimension, strictly opposite of its neighbor-dimension, bluespace. Like bluespace, it's somewhere in-between the real world and its corresponding Hell (Red Hell in this case, of course), resonates with both, and has its own unique properties. It's associated with chaos, struggle, and noise. Looking into it as a psychic or via colorspace headset, you'd see a very red mirror of the real world. Things move about three times as fast as they should and are twice as loud as they should be, and it's not uncommon to see an object that's just totally blown out, like if you took a 3D model and extruded all its polygons.

Redspace has an offset, like bluespace, which works the same way as bluespace's does- varies from place to place, can be artificially changed, makes weird stuff happen if it gets low enough. Like with bluespace and psycholy, bringing the redspace offset down in a contained area is part of the process for refining red milk into red oil.*"
* "Red oil's a refined form of red milk that loses its characteristic 'milky' appearance in favor of translucency, with a faintly iridescent sheen like oil on water. It only glows when moving, and it also has way stronger effects than red milk. If you ingest this you will probably have a heart attack. It's useful for colorspace tech, since redspace is drawn towards it, but it's mostly used as a protective anti-floodwater coating." 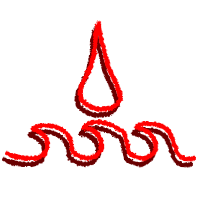 The Flood, and Floodwater
"Like in the home universe, the Flood happens when things get out of control in the real world, and the normal order of it can't be mantained in its current state. Signalled by an unusual amount of cloudcover for over a week, and a faint smell of copper a few minutes before it happens, it begins with bright red rain coming down from the clouds, harder and harder with each minute that passes. Whatever's coming down from the clouds, it quickly contaminates the existing water, and before you know it, boom, whole world's covered in red. It takes a few days for it all to recede again, and everyone who didn't already know it was coming was...well. Basically screwed.

People survived by either hiding underground or getting on specially built boats. A lot of sensitives, particularly the transmitters, already knew it was gonna happen, so they put quite a bit of research into protecting themselves from it. The use of red oil to coat surfaces that were gonna be in contact with the water was a complete shot in the dark- they're very, very lucky it worked.

Now for one thing that differentiates Bluespaceverse- the floodwater itself. The water stayed this way after the flood receded, which basically meant that outside of human settlements, the earth was gonna stay a wasteland. Its properties are identical to normal water in most ways, with two exceptions- it's severely caustic and tends to corrode and dissolve things it comes into contact with, and is also a bright, angry red. Normal tests reveal little about its nature; it seems to just be normal water in a large majority of results. What people knew at the time was that red oil protected surfaces in contact with it from corrosion, at least for a while- and it was this knowledge that kickstarted the production of decontamination facilities, for when they ran out of bottled water." 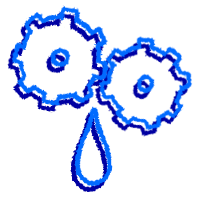 Decontamination Facilities
"Ah yeah, decontamination facilities. Like I mentioned, post-flood, the oceans never recovered. The world's water remained just as red and corrosive as it was during the flood, even overtaking the water cycle. With the world beyond the cities now a caustic wasteland due to this, humanity retreats ever further into the comfort of their cities, reinforcing their buildings against the acid rain. However, humanity (and life in general) still needs water to live, even when most of the water on Earth has turned into caustic floodwater. So what are humans to do?

As research into the properties of floodwater progresses, the cities start building decontamination facilities along the coast, neutralizing the dangerous properties of floodwater and producing normal, clear water on the other end. These facilities need frequent maintenance (the machinery tends to dissolve over time as the red oil coating comes off) and have a few strains unique to them, most of the unique natatorial class." 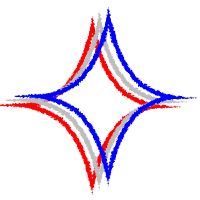 Colordeath
"There's one thing that you absolutely need to know if you're working with colorspace technology- never, ever, EVER let both colorspaces reach zero. Letting even one offset reach zero is a bad idea already, since it causes all kinds of weird stuff to happen, such as temporal anomalies and damage to equipment caused by interlacing of the two universes. But if you manage to let both of them get down that low, either by mistake or by some mad experiment? You're in for a very bad time.

Colordeath is what happens when both offsets get down to zero and intermix with the real world simultaneously. A catastrophic spatial and temporal anomaly occurs that manifests in the real world as a tremendous explosion, worse than anything anyone's ever seen, that wipes both life and color from whatever the fireball touches. This happening is the end of the world, full stop.

Colordeath occurs near the very end of the timeline, wipes out I'd say about 95% of humanity and a ton of stranger species, and leaves behind both very few people and, surprisingly, a whole bunch of new stranger strains. One particular strain, the albexenom, can only generate in the heart of a colordeath, actually."